Just because some of the guitars I have sold are way more expensive than most of us can afford doesn't necessarily mean I'm rolling in the dough. I make around half of minimum wage for what I do, but what drives me forward is my passion of building guitars. On occasion, I have been able to sneak out a guitar or two (in this case 3!) that are not only for my personal use, but what I actually enjoy more is having people drop by my shop & studio and play these "demo" guitars of mine. I love watching people jam out on my guitars and this one was just finished this past week alongside of Todd Grubbs' Zonnebloem guitar and one of my apprentice's Josh got to play this guitar yesterday and already wants it! This guitar has a unique story indeed. Several years ago, Todd had visited me at my studio and tried out my Gibson "Smartwood" guitar and described it as fitting like an old baseball glove. I keep some old memories for years sometimes and this was one of those occasions. Earlier this year, I made my first single-cut guitar called "Souler" that was sold to Jason, who lives up in Massachusetts and to be honest, that was one guitar I did not want to part with. Not just because of the looks, but it actually fit like a baseball glove! Jason's guitar was the second guitar I had made this year out of a Chechen wood board I had purchased last year. I adored the look of this wood after discovering it before I built the Big Kahuna(My first personal guitar, #0). So after shipping it off, I said to myself, why don't you build another one, but with a carved top! (Jason's is a drop-top) I decided to call it a "glove" series and thought it would be a cool idea to inlay a coin in between the pickups. I mentioned the idea to a friend, Doug, who ended up commissioning me this year to build him one! (Crazy Horse). While looking for a coin on eBay one night , I stumbled upon what were called "Hobo Nickels" (Do a Google search on them, they'e SO cool!)and I tried bidding on one that just so happened to be made from a 1963 nickel(my birth year), but I lost the bid and contacted the guy to see if I could simply commission him to make me one. And it just so happens, the guy doing this coin etching is a guitarist too! His name was Jerry Morales and we ended up becoming friends through the correspondence and posts via social media. He, his wife and daughter actually visited me in my studio a few weeks ago while visiting the Tampa Bay area and they are from San Antonio, Texas(Nicest people you'll ever meet and Jerry is an AMAZING guitarist as well!). I was so impressed with Jerry's work, I had asked him if he wouldn't mind etching a copper trussrod cover I had made for the build too and he obliged. His hobo nickel inspired me to inlay a full-body representation of Thomas Jefferson on my fingerboard, holding the second guitar I built "The Vine" and of course, his face was turned into a skull as well. Props to Stan Morrison(one of my favorite living artists) for helping out with the angling of the skull too! As with all of my personal guitars, they all have a skull and all 3 skulls have a "gold tooth display" (ZZ Top reference kids!) So that's my story and I'm sticking with it. 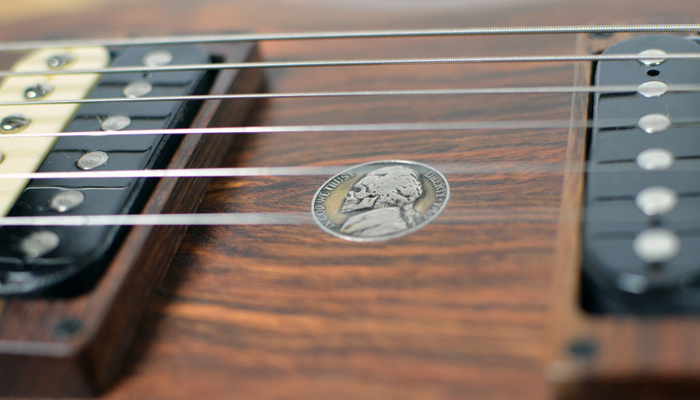 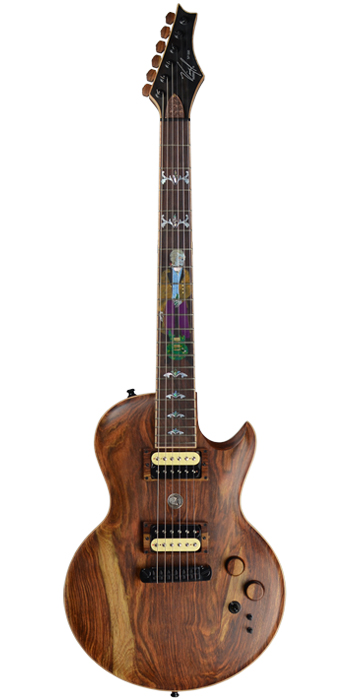